Cigars and bones, early morning fishing at the entrance to Pearl Harbor.

When I think of some of my best times on the flats, more than just snap shots of fish and places come to mind.  In particular, it’s more a movie, or series of events all running in front of the backdrop of fantastic locations, sights and sounds.  Add the smoke of a good cigar carried on the light trade winds and you’ve got a good morning a the entrance to Pearl Harbor, home of some of the best walk in bonefishing in the world. 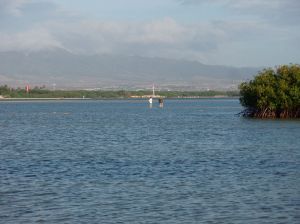 The trades hadn’t come up yet, and the sun was just high enough that you needed your sunglasses on.  This particular flat was referred to as Greg’s Gravel.  One of the guys who fished there often said it was called that  because the only guy to catch a fish there was this guy named Greg.

The story that was passed on was as follows.  There is this part of the Pearl Harbor/Hickam Flat complex that runs parallel to the harbor entrance, just on the eastern side, close to shore.  This particular spot is on a shallow part just on the land ward side of a bar.  The wave action in this area deposited or more likely washed away all the sand revaling a marled, broken, dead coral and rocky bottom.  This gravel held a great deal of bonefish on an incoming tide.  Now, the tough part was because of this bottom and the proximity to the “open ocean” this spot was usually pretty choppy.  For those who are acquainted with the ghost, the chop and “multi-colored” made for extremely difficult fish spotting.  The place was so difficult that almost no one fished there, and the rumor was that the bones there were wise and never took a fly.  Well there was one guy who said, “can’t see fish, won’t take a fly, we’ll see about that”.  And in a matter of 15 minutes had hooked and landed a nice sized bonefish.  From that day on, the place was known as Greg’s Gravel.  Named after, yes, Greg the guy who proved this other guy wrong.  Well this morning I was fishing out on the gravel, if you get there early enough, with no winds on the right tides, the tails mark more fish big fish than almost anywhere in the world.

Since it was a weekday, there was only one other guy fishing, Harry.  Harry is a retiree who fishes those flats almost everyday and probably knows more about the Pearl Harbor and Hickam flats than anyone else.  (Except for maybe this other guy, Esa, he’s another story).  While Harry was working the out edge of the flat, I fished closer inside.  I mostly fished the inside, especially in the mornings.  That’s where the tailing fish hang out.  I hadn’t seen any yet, and was watching Harry work.  He’s got a great cast, throwing loops that would make anybody jealous.  Things were slow, maybe the tides, or maybe the moon or maybe the mantis shrimp were on strike, but for what ever reason I wasn’t seeing fish.  I turned to the one bit of juju that I have, the cigar.

In this case it’s a corona from the Rodriguez Cigar Factory in Key West.  These cigars hold a special place for me.  There are only two ways to buy from the factory, one call them up or go to the store front.  The have no website, just a phone.  The factory is one of the few Key West cigar makers still clinging to the historic cigar manufacturing times of the old Keys.

On this day, I combined my two favorite places.  Breaking out my Rodriguez Corona, I lit it up and just took in the scenery.  That’s the beauty of the stogie on the flats, it provides a break from staring endlessly into the water and also reminds me to take a look around once and a while.  As the light trade winds blew cigar smoke around my head, I reflected back on how fortunate I was to be there, and of all the times I had fished these flats, and of all the places I’d fished before.  As I was taking it all in the cigar mojo began to work and had conjured up a good Hawaiian bonefish who was tailing his way towards me in the shallows.

Now, the downside to the cigar on the flats is that it adds another thing to worry about when you are trying to make the magic happen and make a solid presentation.  Holding the cigar in my mouth, I thought that I must have looked pretty cool, but in reality it probably wasn’t a pretty sight.  Making a decent cast when a good sized bonefish is bearing down on you is no easy task, and I added the distraction of a cigar.  The first cast landed about where it needed to, about 35 feet in front of me.  After the cast, the next part is the action.  For Hawaiian bones, the technique is simple, when you think you are moving too slow, slow down.  Coach Duff 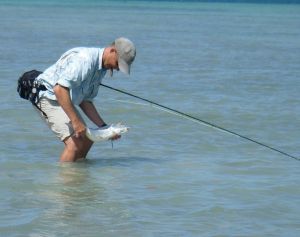 taught me the Hawaii move, stop, one long slow strip, stop.  I let the fly sink, and tried to follow the Coaches advice.  This time, the cigar helped.  Holding the cigar, the smoke swirling around my head, I made a long slow strip and then the waiting game began.  The bone approached the fly and checked it out for what seemed like forever.  Against all instinct I could hear Coach reminding me in my head, “let it sit, don’t move it”.  Just then, the fish moved forward, and tipped up and barley wiggled.  Count to one, breath, now strip strike!  And we are off to the races.  The reel sings the song that all flats fishermen love as the bone heads south.

After the fish makes several runs out to Harry and back, I get him to the hand.  He’s a nice fish and I pop out the hook and send him on his way.  Much to my surprise my cigar is still lit.  So, as I watch the fish swim away, I smoke my cigar and smile at my good luck.