From the bow of the skiff, staring into the water. Luciano, my guide, quietly directing my vision to a dark spot in front of the boat. There, the spot moves, a black spike rises above the surface. “Palometa, 40ft cast now!”, Luciano says. Cast now, cast now he says, I can barely stand up.  Permit fever. Back cast, a mess, forward cast not gonna cut it.  I can’t make the loop.  Stop, breath, relax, make the cast.  OK, not a bad cast.  Slow strip, wait, wait…nothing.  “Cast again”.  To quote another famous fisherman, this fish is “either very smart or very dumb”. (Quint, from Jaws).  The fish keeps on hanging around, cast after  blown cast.  He’s taunting me.  I started this trip with a head of brown hair,  half way though the first morning, I’m going grey chasing this permit.  It’s been 15 mins now.  The wind is picking up, I don’t know how many more casts I can make.  Luciano has been poling the skiff across what seems like acres of flats, in and around mangrove hammocks chasing this permit.  We get ahead of him, and set up for the perfect shot…wait for it.  40 ft 11 0’clock, cast now.  One false cast, back cast, here we go…WHAP, what’s that.  FOR THE LOVE OF MARY!!!  I’m hooked…into the stinking mesh ventilation in the back of my shirt.  The permit closing the distance, clearly he intends to make me lose my mind.  Work the hook free from the shirt, don’t look at the fish, work the hook.  Damn it! you looked at the fish.  Still hooked into my shirt, the fish turns, and stops to eat, take off this stinking shirt.  Finally, hook is out, where’s the fish.  There he is, he’s on to something.  30ft 10 o’clock, cast now.  OK, not great but the fly is in the water.  Slow strip, wait now, take it easy.  Can’t see, wait, he’s on it…set, set.  AND he hooked and running!!  Don’t screw it up now.  Into the backing he goes.  Bring him back, and now for the knife fight, in close short jabs.  10 mins since hook up, he’s by the boat, and up for the photo. 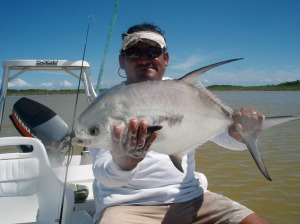 Luciano with the Permit of Boca Paila

That’s the way it was, 5 November 2008 in Boca Paila.  After that, everything seemed right with the world.  The first fish, on the first day.  I couldn’t have hoped for anything better.  That evening back at the lodge any reservations I had about being able to keep up with the other anglers vanished after during the first round of cocktails and I was a bit of a local legend for about two days.  (at least in my mind)

2 thoughts on “Boca Paila, from zero to hero”